Historic buildings form part of our heritage and can date back many centuries. We understand the importance of solutions which not only provide life safety and security, but also complement the history and heritage of a building and surroundings, in which they are designed for.

The provision of specialist application solutions including radio based fire and security systems are of particular benefit where the installation of cables may be deemed unsightly, impractical or simply not desirable. 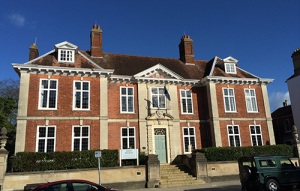 Fire detectors from Apollo’s Discovery, Xpander and XP95 ranges have been chosen to protect West Sussex County Hall, Chichester, the headquarters of West Sussex County Council (WSCC). The contract for the design, supply, installation and commissioning of the fire detection system was awarded to Southern Fire Alarms Ltd (SFA), acting as a specialist sub-contractor to the main contractor, Willard Electrical Services (1981) Ltd.

The WSCC headquarters consists of a main five-storey building and seven satellite buildings. One of these is Edes House, a Grade I listed building that was built in 1696. The Georgian building was bought by the County Council in 1916 and used as council offices until the building of the present county hall in 1936. Today, the house is still used for County Council meetings during the day and is open for a variety of artistic, ceremonial and cultural activities at other times.

Other buildings at the headquarters are host to the council chambers, administration departments, the County Council Emergency Management centre and a main critical systems server room. Each of these locations had very different requirements and SFA recommended an Apollo-based detection system that was designed to meet L2 standards as required by West Sussex County Council.

More than 700 Apollo devices were installed alongside an existing fire alarm system, which needed to be retained until the new system was tested and commissioned. David Fell, Sales Director at SFA, explains: “For this installation we had a number of situations where specialist devices were required and Apollo was able to meet our demands. West Sussex County Council required an open protocol system. Apollo technology was chosen as it offers a great deal of flexibility when considering maintenance and, if required, spare parts are easily available.”

The fire detection system had a number of specific requirements, which Apollo technology was able to meet. For example, fire detection was required in the building’s attic spaces to supplement the existing smoke detection. Apollo’s Discovery Carbon Monoxide detectors were chosen to operate where the ceiling construction consists of multiple beam structures. As well as being able to operate in one of five response modes, Discovery detectors also incorporate drift compensation, which reduces the likelihood of false alarms as the detector can adapt to dirty or dusty environments.

The council chamber, Chief Executive’s office and entrance halls presented a very different fire detection challenge. The installation of hard-wired devices would have caused unacceptable damage to the decorative design on the walls and ceiling, so Apollo’s Xpander range of wireless detectors were chosen. Designed for use in areas where hard-wired fire detection is impossible or impractical, Xpander devices are also a good option for listed buildings, which may have strict rules regarding alteration to the original fabric of the structure.

Specialist fire detection was also required in the county hall’s generator oil store room. Due to the volatile nature of the room’s contents, care needed to be taken with the fire detection that was installed. Electrical equipment for use in such areas must be designed so that it cannot ignite a flammable mixture, so Apollo’s XP95 Intrinsically safe (IS) detectors were recommended. The range has been specifically developed for use is hazardous areas.

XP95 interfacing devices were installed to connect the fire detection system to a number of the other building systems, including the air handling unit, gas shut off and access control. As part of the fire system specification, Southern Fire Alarms also provided a bespoke panel and Apollo sounders in case of a bomb alert.

I would like to take this opportunity to update you as to the steps SFA have been taking to ensure day to day operations continue with as little disruption as possible whilst ensuring the safety of our staff.

We have been closely monitoring the situation and taken measures to minimise the impact this unprecedented event may have on our stakeholders, customers and business.

We have taken appropriate measures to keep our people safe by reducing headcount and introducing distancing within the office, implementing additional cleaning measures and non-contact equipment deliveries, plus implementing home working where possible.

All training sessions and non-essential site meetings have been cancelled or postponed at this time, and video conferencing facilities have been setup.

We will continue to monitor the situation and endeavour to update you as soon as possible, should we need to make further adjustments.

Our thoughts are with everyone already affected by the Coronavirus, and we would also like to extend our gratitude and thanks to all the Healthcare and supporting keyworkers working tirelessly during this time.

We all have a responsibility to care for and support our colleagues and communities, and I am in no doubt that we will get through this stronger together.